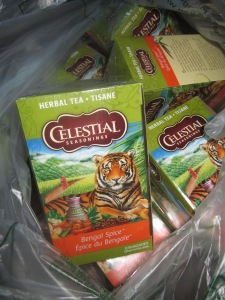 I’ve got some bad news and a silver lining.  Remember the Celestial Seasonings Bengal Spice herbal tea my friends and family adore?

Well, we won’t be adoring it anymore.

I say “likely” because the report comes with a modifier:  Speaking of trashing stock, the investigation was commissioned by Glaucus Research, a company that makes money by shorting stock—that is, by betting that stock prices will decline.  Their recommendation for Celestial Seasonings’ parent company: “Strong Sell.”

Late last year, Glaucus released a similar report dissing Teavana teas for their pesticides—just a month before Starbucks closed on its purchase of Teavana.

This time Glaucus is taking on Hains, the parent company of Celestial Seasonings and of other products with healthy images—“ a $3 billion roll-up of disparate consumer food brands that we believe is masquerading as a healthy/organic food business,” says Glaucus.

Hains’ stock price is way inflated, they say, and they accuse its CEO of illicit practices—dumping $33 million worth of stock after he appeared on national television touting his company’s potential for growth.

But back to the pesticides, our utmost concern.

Despite its potentially contaminated motives, Glaucus engaged an  independent lab that appears to be well-known in the industry—Eurofins Scientific, with offices in more than 30 countries around the world.  Eurofins tested 11 different types of Celestial Seasoning teas and found pesticides in all but one of those types. In fact, more than 90 percent of the samples violated US pesticide standards (although if you read between the lines, some of the pesticides found are not regulated by US federal law, for whatever that’s worth.)

Granted, pesticide residues are in most of our foods. Even organic foods sometimes get contaminated because of their proximity to conventional farms.

So what should we make of all this hoopla? Is Glaucus simply pushing our buttons to get us to sell our stock in Hains so Glaucus can make money?  I really have no idea. But the risk avoidance approach to an anti-cancer diet means we should probably start making our own spice tea from now on.

Imagine how hard it is to tell your readers that your recommendation was wrong—Well, it wasn’t wrong when I made it, but new research changes its value. What’s the silver lining?

At least you know I’ve got your back.