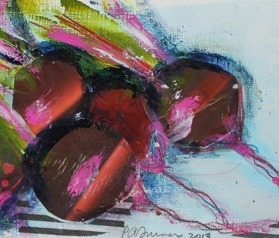 Dr. Oz’s raw beet juice may lower your blood pressure, but the recipes he’s flagging have no place in your anti-cancer kitchen.

Add pineapple, orange juice, agave to sweeten it, he suggests.  But why do we need more sugar in the juice of sugar beets? Otherwise it tastes like dirt, complained some of the show’s participants.

The problem with juices made from sweet fruits and sweet vegetables is that the sugars are rapidly absorbed in your blood, thus causing your pancreas to release lots of insulin, which spurs the growth of many types of cancer cells.

Has anybody tried using Stevia instead? It doesn’t raise your blood sugar.

Or here’s another solution:  Grate your raw beets and eat them in a salad. That way you’ll get plenty of fiber to help slow down your absorption of those sugars.

Yes, beets are good for you. They help improve your cardiovascular system, liver and kidneys.

And Dr. Richard Beliveau, a biochemist and food researcher at the University of Montreal, puts beets near the top of his lists of foods that fight cancer. (Check out the colorful graphic representation of those lists in the book “Anti-Cancer: A New Way of Life.”) Their red pigment has shown “ strong growth inhibition against breast, colon, central nervous system, and lung cancer cells.”

Your DNA is constantly being damaged and always trying to repair itself, and beets help with that repair by improving a process called methylation. In short, the important betaine compound in beets hands over a methyl group (one carbon and three hydrogen atoms) that in turn reduces high levels of homocysteine, which damage DNA.  B vitamins help this process, too!

So instead of downing pure sugars, how about creating a red, beige and green anti-cancer recipe–using grated raw beets, a handful of chickpeas and loads of folate-filled leafy greens, including from your beets, instead?

Thanks to http://www.peggyannturner.ca for artwork that you can’t beat.