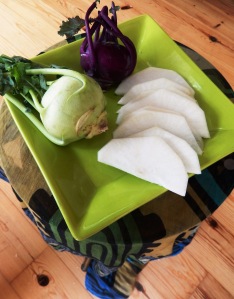 This week’s New York Times Diner’s Journal called it an “unusual vegetable,” but they didn’t tell you about the anti-cancer value of this stranger.

Kohlrabi, seen here in green and red, is a member of the holy crucifer family of vegetables, known for their cancer-fighting compounds. Like collard greens, kale, radish, watercress, arugula and their more familiar cousins, kohlrabi is filled with the enzyme myrosinase, which turns sulfur-filled compounds called glucosinolates into isothiocyanates, which in turn fight cancer. The glucosinolates also get changed into compounds called indoles, which seem to modify estrogen’s ability to spur cell growth.

(A quick word of caution here: If you’re taking drugs that work via the same pathways as crucifers or if you have thyroid problems, speak with your doctor. )

Remember when we talked about the alliin enzyme in the onion and garlic family and how you have to cut them and let them sit around so that the enzyme can do its conversion? Apparently, that’s not the case with crucifers, says Dr. Mark W. Farnham, PhD, with the USDA’s vegetable research lab in South Carolina. You don’t have to let them sit after cutting.

In fact, the key, Farnham says, is to get and eat crucifers as fresh as possible. The act of chewing will release the enzymes and catalyze the conversion process.

As we’ve heard before, when it comes to crucifers, raw or very slightly cooked is best; if you cook them too much, you will destroy the myrosinase enzyme. Dr. Paul Thornalley, food scientist at the University of Warwick, also warns about cutting them too thinly. Shredding them, he says, will cause them to degrade quickly. Keep the cut to at least 1 centimetre  or 1 millilitre. And after you cut them, stick them in the fridge, he suggests. Don’t let them sit around at room temperature.

You mean the NYTimes’ shredded cole slaw recipe may not be the best choice if you’re seeking to maximize kohlrabi’s anti-cancer properties? Yes, that’s what I mean. Here’s another idea:

Slice some kohlrabi rounds, then pretend they’re crackers and dip them into a little humus or the Jittery Cook’s Herb Pesto.  Top it off with my all-time anti-cancer favorite: a thin slice of raw red onion–a small onion please, lightly peeled, if you’re really in search of anti-cancer value.