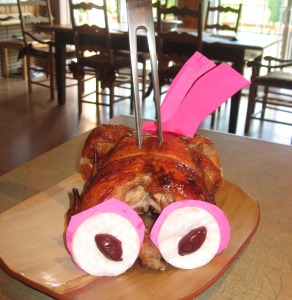 Chicken’s off the platter if your New Year’s resolutions include restricting methionine–a promising new strategy to fight cancer and forestall aging.

What’s the latest advice that scientists are dishing out for your anti-cancer diet?

Read the backstory first to enhance tonight’s exchanges with loved ones.

The good news is that certain compounds in plants can interfere with cancer’s ability to use glucose and protein as fuels. If fermentable fiber was last year’s buzz word, this year all eyes will be on flavonoids.

Here’s my New Year’s gift to you, dear readers–the first in a series of three posts summarizing the latest science on strategies for fighting cancer and for promoting longevity.  Good health, long life to you all.

Part 1: Off the Platter: Suspect Proteins     What’s Hiding Inside Protein?

Summary: Many amino acids, the building blocks of protein, affect your cell signaling pathways and tell all cells to grow, grow, grow.  That’s good if you’re young and healthy and still developing or even if you’re elderly, but most of us need cells to die like every normal cell should.  New research suggests that one amino acid in particular, methionine,  and its relationship to another, glycine, may be the key to fighting cancer and, even if you’re in top shape, prolonging your life.

Instead of focusing on the many different genes involved in cancer, for the past few years a group of prominent scientists have been asking a different question:

What do cancer cells have in common?

Cancer cells are victims of faulty metabolism, they say.

Esteemed scientists such as Memorial-Sloan Kettering’s chief Dr. Craig Thompson, Boston College professor Dr. Thomas Seyfried and the University of Toronto’s Dr. Tak Mak all agree: Cancer cells burn fuels for energy—carbohydrates, proteins, fats, for example– differently than normal cells do, in a way that promotes their eternal growth. The faulty metabolism, they say, is due to damage to your cells’ mitochondria, the part that functions as its power plant.

This metabolic approach to understanding cancer got its start almost a century ago when Germany’s Dr. Otto Warburg discovered that cancer cells thrive on glucose. Many cancer cells take up glucose from their environment and turn it into lactic acid, which the liver then converts into more glucose. Glucose signals the pancreas to release the hormone insulin, which ushers glucose into cells. But insulin, it turns out, also signals cancer cells to grow.

Since Warburg’s work, interrupted by a world at war, many studies of human populations have found that high levels of insulin are associated with increased risk of many cancers (but not all cancer. Slow-growing prostate cancer, for example, is apparently not driven by glucose.)

And many studies are now underway examining whether by restricting insulin, ketogenic diets can help people with cancer. With minimal intake of sugars (under 50 grams of carbohydrates a day), the body switches from burning glucose to burning fat molecules called ketones, and the theory is that cancer cells may not be able to use ketones as fuel. Proponents suggest adding drugs that deplete glucose and hyperbaric oxygen treatments as well.

Take a normal cell. Once it divides about 50 to 60 times or if it becomes damaged, it commits suicide, or apoptosis. (Well, most normal cells do, but some just become dormant, and you hope that another regulatory process, called autophagy, eventually kicks in to do some cellular housekeeping and sweep up debris.)

Cancer cells, however, don’t die. They keep dividing and thus multiplying and utilize and produce nutrients in their environment to support their growth. They trick nearby normal cells into handing over nutrients for energy. They develop blood vessels through which they spread throughout the body (through the process of angiogenesis) and secrete enzymes that take over organs.

Scientists from both the genomic and metabolic camps converge on what I call the inflammation highway. They all agree that this perpetual growth is driven by defects in cell messaging. Defects in any of about 15 different cell signalling pathways through which cells communicate allows cells to continually transmit signals that say “grow, don’t repair yourself, never die.”

Scientists also agree on the initiating cause:  Oxidants–from the air you breathe, the foods you eat, the sunshine that you bask in, for example–harm your cells. Oxidants create free radicals of oxygen, molecules of oxygen that are missing an electron and have to steal one from nearby cells. That’s damaging.

(From the viewpoint of traditional, gene-oriented scientists, oxidants directly cause DNA mutations, which, if not repaired, lead to cancer. According to the metabolic group, oxidants damage your cells’ mitochondria, causing your cells to burn fuel like a coal-burning factory, creating smoke filled with free radicals, which in turn damages DNA. )

“It’s like a wildfire out of control,” says the head of The Angiogenesis Foundation, Dr. William Li,  describing the inflammatory proliferation that characterizes cancer. When oxidative damage and hence inflammation are chronic, your immune system keeps generating free radicals of oxygen and sending grow messages to cells.

It’s a long way, however, from cancer initiation to deadly outcome, and your body has lots of regulating mechanisms along the way—lots of ways to avert oxidation, tamp down inflammation and keep your mitochondria burning cleanly, like a Tesla not a coal-fired furnace.

Cancer cells feed off nutrients in their environment—nutrients they can obtain from the foods you eat and the hormones your body produces, which can signal cells to proliferate, not die.

A few years ago, I posed the question to Dr. John Milner, formerly head of the National Cancer Institute’s Nutritional Science and Research group and a pioneer in nutrition and cancer research: Does diet affect those cell signalling pathways?

“You bet,” he responded. “I can’t think of a single pathway that diet does not influence.”

Off the Platter: Suspect Proteins

So where are you getting your protein? That’s a question people on plant-based diets are often asked. It’s turning out, however, that like glucose, protein– especially certain amino acids and too much protein–helps cancer cells flourish.

Amino acids are the building blocks of protein. They tell cells to grow by activating key signalling pathways both within and between cells–pathways that cancer cells also utilize.

Off the Platter: Leucine, Glutamine and perhaps Especially Methionine

Ever wonder why bodybuilders flock to whey protein supplements?

Whey, a major protein in dairy products, is rich in leucine, an amino acid that  triggers muscle growth. Leucine directly activates a compound in muscle called the mammalian target of rapamycin (mTOR), which, in conjunction with other compounds, works as a molecular switch– a hub for coordinating the complex signalling systems within cells. Like glucose and insulin, leucine flips open the switch, thus allowing cells to receive signals that say “build muscle.”

Leucine is not the only amino acid that promotes mTOR signalling. Glutamine, the most common amino acid in your blood, does that, too.

Over the past few years, scientists studying how cancer cells metabolize fuels for energy have found that many cancer cells readily take up glutamine and metabolize it at a much higher rate than other amino acids. Just as they’ve done with glucose-inhibiting drugs and PET scans that utilize glucose to identify cancer cells, scientists have been developing drugs that inhibit glutamine and diagnostic tests that rely on the amino acid to light up cancerous cells.

Not all cancers, however, are dependent on glutamine. Breast cancer involving basal cells generally is, for example; the luminal type is not. So how do you know if your cancer thrives on glutamine? Cancers with defects in the Myc or Ras family of genes are particularly sensitive to it, say scientists.  (And good news–drinking green tea inhibits cancer cells from using it.)

From mTOR to IGF-1—and Vice- Versa and Vice-Versa

While mTOR controls the signalling within cells, a hormone called Insulin Growth Factor-1 (IGF-1) activates the signalling pathways between cells. The two feed off one another. IGF-1 opens up the mTOR switch; mTOR stimulates more IGF-1.

IGF-1 is actually a growth hormone. It tells cells to grow, which can be good if you’re young or even if you’re elderly. But IGF-1 does not discriminate; it also signals cancerous cells to grow. In addition, it lowers your Sex Hormone Binding Globulin, leaving sex hormones to circulate in your blood. High levels of IGF-1 have been associated with many cancers—including prostate and estrogen- positive breast cancer, both driven by sex hormones.

The higher your intake of animal protein, the higher your IGF-1, says nutrition expert Dr. Michael Greger, a medical doctor whose popular blog and recent book, How Not To Die, are filled with wisdom about plant-based diets.

And that brings us back to where we started the story:  Methionine is unique among amino acids. It damages the mitochondria of normal cells, the part that controls how cells burn fuel for energy. (In another study published this year, the same scientists who found that restricting methionine destroys cancer stem cells also found that common antibiotics can destroy cancer stem cells via the same mechanism–by targeting the mitochondria of cancer cells.)

Many cancers are methionine-dependent, says Australian researcher Dr. Paul Cavuoto. “ If I had cancer, I would certainly seek to restrict methionine in my diet, probably to 1 gram a day (so long as I don’t become deficient in key vitamins and nutrients),”  he says.

So what foods are rich in methionine?

Plus, look at all that glycine in soybeans, also known as glycine max!

On the Platter: Glycine

Recent research also suggests that glycine, another amino acid, may act as an antidote to excess methionine and have the same benefits as restricting methionine. Glycine helps tame inflammation and keeps your genes functioning properly. Plus, it helps convert methionine to glutathione, your body’s most important anti-oxidant.

In animals glycine concentrates in parts we usually don’t eat—skin and connective tissue and bones. (That may explain the latest trend of drinking bone broth.)

But of all foods, the one family with the most favorable glycine: methionine ratio (that is, the most glycine and least methionine) is legumes—beans, lentils and peas.

And that’s where we’ll pick up after tonight’s festivities. Next on the platter: Which proteins are best and how much?  Meanwhile, celebrate with some Gracias a la Vida and whatever makes you feel good. You can add “restricting methionine” to your anti-cancer diet tomorrow.